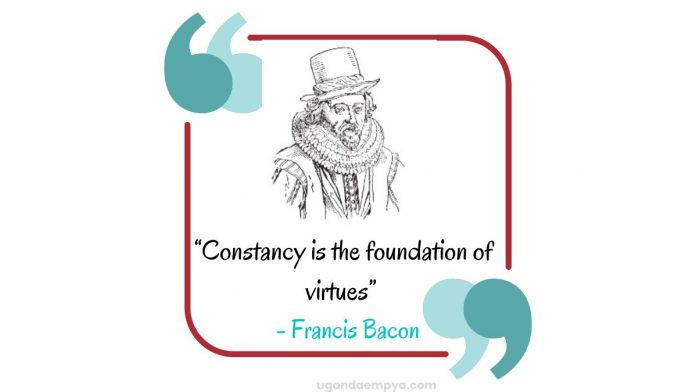 Francis Bacon was a brilliant thinker and philosopher who had a lot of wisdom to share. His quotes are insightful and thought-provoking, and they can help you to see the world in a new way. Here are some of my favorite Francis Bacon quotes.

Born in London in 1561, Francis Bacon was the son of Sir Nicholas Bacon, a statesman and advisor to Queen Elizabeth I. From a young age, Bacon showed a keen interest in learning and science, and was educated at Cambridge University.

After leaving university, Bacon entered politics and served as an advisor to the Queen. However, he soon became disillusioned with politics and turned his attention to science.

Bacon is best known for his work in science and philosophy. He developed the scientific method, which is still used today. He also wrote extensively on the topics of human knowledge and understanding. In his work, Bacon emphasised the importance of observation and experimentation, and argued that the acquisition of knowledge should be based on empirical evidence.

There is no doubt that Francis Bacon has left an impressive legacy on the world. He was a philosopher, scientist, and statesman who made significant contributions to all three fields. His philosophy was based on the idea of empiricism, which holds that all knowledge comes from observation.

5. “Money is a great servant but a bad master.”

6. “It is a sad fate for a man to die too well known to everybody else, and still unknown to himself.”

8. “Constancy is the foundation of virtues”

9. “Some books should be tasted, some devoured, but only a few should be chewed and digested thoroughly.”

13. “Nature cannot be commanded except by being obeyed.”

14. “Wonder is the seed of knowledge”

16. “In taking revenge, a man is but even with his enemy; but in passing it over, he is superior.”

17. “Money is like manure, its only good if you spread it around.”

18. “Whosoever is delighted in Solitude, is either a wild Beast or a God.”

20. “The worst solitute is to be destitute of true friendship.”

21. “The root of all superstition is that men observe when a thing hits, but not when it misses.”

24. “For the things of this world cannot be made known without a knowledge of mathematics.”

29. “Truth will sooner come out from error than from confusion.”

33. “Nothing is pleasant that is not spiced with variety.”

34. “Write down the thoughts of the moment. Those that come unsought for are commonly the most valuable.”

35. “For a crowd is not company; and faces are but a gallery of pictures; and talk but a tinkling cymbal, where there is no love.”

36. “Truth is the daughter of time, not of authority.”

37. “Read not to contradict and confute, nor to believe and take for granted …but to weigh and consider.”

38. “Death is a friend of ours; and he that is not ready to entertain him is not at home.”

39. “I wonder why it is that the countries with the most nobles also have the most misery?”

41. “A false friend is more dangerous than an open enemy”

43. “Champagne for my real friends, real pain for my sham friends”

44. “A bachelor’s life is a fine breakfast, a flat lunch, and a miserable dinner.”

48. “Silence is the sleep that nourishes wisdom.”

50. “Men fear death as children fear to go into the dark and as that natural fear in children is increased with tales, so is the other”

51. “They are ill discoverers that think there is no land when they can see nothing but sea.”

52. “If a man is gracious and courteous to strangers, it shows that he is a citizen of the world.”

53. “Truth is a good dog; but always beware of barking too close to the heels of an error, lest you get your brains kicked out.”

54. “The best part of beauty is that which no picture can express. ”

55. “It’s all so meaningless, we may as well be extraordinary.”

58. “it might be a long trip, so be careful not to wear your shoes out: you might need them in the afterlife.”

59. “There arises from a bad and inapt formation of words, a wonderful obstruction to the mind.”

60. “Where a man cannot fitly play his own part; if he have not a friend, he may quit the stage.”

61. “Read not to contradict and confute; nor to believe and take for granted; nor to find talk and discourse; but to weigh and consider.”

62. “Nothing is so mischievous as the apotheosis of error.”

63. “If a man look sharply and attentively, he shall see fortune; for though she be blind, yet she is not invisible.”

64. “So if a man’s wit be wandering, let him study the mathematics.”

65. “Choose the life that is most useful, and habit will make it the most agreeable.”

66. “Libraries are as the shrine where all the relics of the ancient saints, full of true virtue, and that without delusion or imposture, are preserved and reposed.”

67. “Worthy books are not companions – they are solitudes: we lose ourselves in them and all our cares”

68. “Good thoughts are little better than good dreams, except they be put in action.”

69. “Look upon good books; they are true friends, that will neither flatter nor dissemble: be you but true to yourself…and you shall need no other comfort nor counsel.”

70. “For better it is to make a beginning of that which may lead to something, than to engage in a perpetual struggle and pursuit in courses which have no exit.”

Emily Dickinson was a prolific American poet who is known for her unique and introspective lyrics. Dickinson was a recluse who spent her days...
Previous articleGeorge S. Patton Quotes – Wisdom from a Legendary American General
Next articleWilliam James Quotes – The Father of American psychology